Introduction: Due to a rising life expectancy and an improvement in diabetes treatment all health care professionals are faced with an increasing number of elderly with diabetes. About one quarter of diabetic patients will suffer from diabetic foot syndrome at least once in their lifetime and often amputation is necessary within the next 4 years. Early start of a targeted and effective antibiotic treatment based on the most common germs and their antibiotic resistance is therefore essential to save feet. Are there differences in detected bacterial strains between older and aged people with infected DFS?

Method and Materials: Identifying all geriatric patients treated due to infected DFS between October 2018 and March 2019 and recording every detected germ with its resistance properties. Descriptively presentation of results in two groups (age ≤ 70 and > 70 years).

Results: 177 cases and 514 germs could be identified with a median age of 71 years and a proportion of 77% men. In both groups gram-positive germs form the majority with about 60%. With increase of age a slight increase of gram-negative germs, especially Pseudomonas aeruginosa (PSA), could be detected (+ 1.4%). Staphylococcus aureus (SAU) was the most common gram-positive germ (20%) in both groups. There was a high resistance rate against benzyl- and aminopenicillins without inhibitor of β-lactamase (β-LI) of about 62 and 77% respectively. PSA showed increase of resistance against Piperacillin (+ 17%), Piperacillin/Tazobactam (+ 8.7%) and Ceftazidime (+ 8.7%), whilst those against Imipenem and Meropenem decreased (- 15.9%) with increase of age. None of the isolated PSA strains showed Gentamicin or Cefipime resistance. Resistance of gram-negative germs against Piperacillin/Tazobactam, third generation Cephalosporins, Meropenem and Gentamicin were below 10% and even decreased with increase of age.

Conclusion: Regardless of age the majority of infected DFU are caused by gram-positive germs. Because of high resistance rates against penicillin without β-LI in gram-positive germs, Penicillin should always be combined with β-LI. When gram-negative germs are suspected Piperacillin/Tazobactam or Meropenem are appropriate and effective treatment options, although resistance rates in PSA might be higher with increase of age.

Diabetes mellitus and its complications are a major health care burden. Caused by a rising life expectancy and an improvement in treatment of diabetes mellitus type 1 and 2, the prevalence of diabetes among elderly is high. About one third (34% in men and 32% in women) of people at the age of 80 to 85 years suffer from diabetes [1]. Pursuant to this, there is an amount of DFS among geriatric patients. The prevalence in Germany is estimated about 5% to 10% [2,3]. Geriatric patients with DFS can lose their autonomy and forfeit physical strength, musculature and coordination during the often lengthy treatment of infected diabetic foot ulcers (DFU). A targeted initial antibiotic treatment aiming the causing bacteria is therefore indispensable. But are there differences in microbial spectrum and antibiotic resistance between old and aged people? Is there a shift during the years?

Identifying all geriatric patients treated due to infected DFS between October 2018 and March 2019 in our certified diabetic foot treatment unit in southern Germany. We documented age, gender, HbA1c, creatinine and C - reactive protein (CRP) at the moment of admittance. Each detected germ was documented separately with his antibiotic resistance properties. Every wound was recorded separately. The data were presented descriptively in two groups, one with age ≤70 and one >70 years respectively.

177 cases could be identified with a median age of 71 years and a proportion of 77% men. These cases presented with 209 wounds and 514 germs. In 68% results of antibiotic resistance testing was available. Frequently Streptococci and Corynebacteria weren’t tested in routine diagnostic. Characteristics of the two patient groups shows Table 1.

The majority of infected DFU in both groups were caused by gram-positive bacteria, notably by Staphylococcus aureus, (Figure 1). There was a slight but not significant increase of gram-negative species in the group above 70 years (+1.3%), caused by rise of Pseudomonas aeruginosa (PSA). 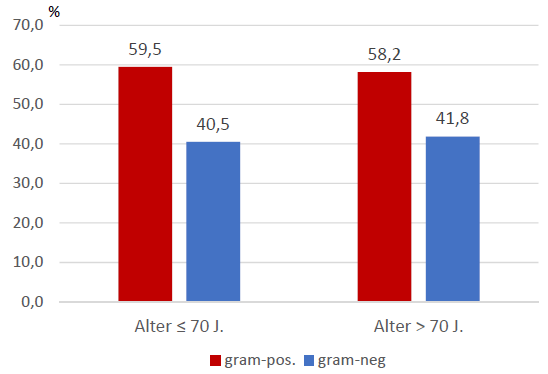 The most important gram-positive species were Staphylococcus aureus (SAU) with 22%, Enterococcus feacalis (EFC) with about 8% to 10%, koagulase-negative Streptococci and Corynebacteria species with about 5% respectively. Pseudomonas aeruginosa (PSA) and Proteus spec. were the most common gram-negative germs. With increase of age there was growth of Enterococci (+2.2%) and Pseudomonas (+5.5%) (Figure 2). There was also a moderate increase of anaerobic germs like Finegoldia magna (+2.0%). 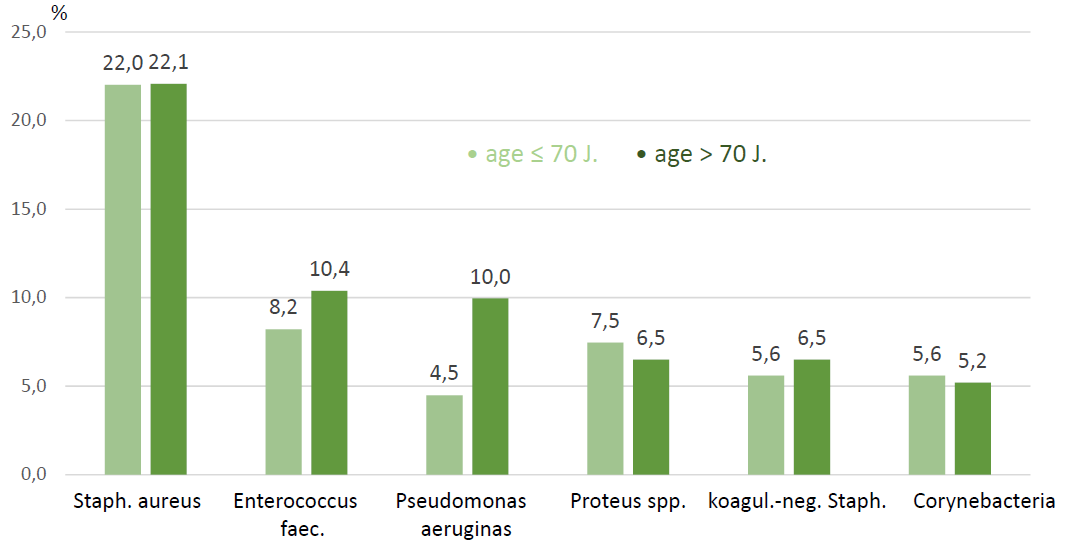 The resistance of SAU against Penicillin without inhibitor of β-lactamase (β-LI) was high and rose with increase of age, whilst resistance against Penicillin combined with β-LI or against second or third generation Cephalosporin was as low as against Oxacillin. Oral administered antibiotics like Clindamycin, Erythromycin or Ciprofloxacin showed resistance rate of about 20% in each group (Figure 3). The prevalence of MRSA was 2/84 (2.4%) in the group 70 years and younger and 1/93 (1.1%) in the group older than 70 years. 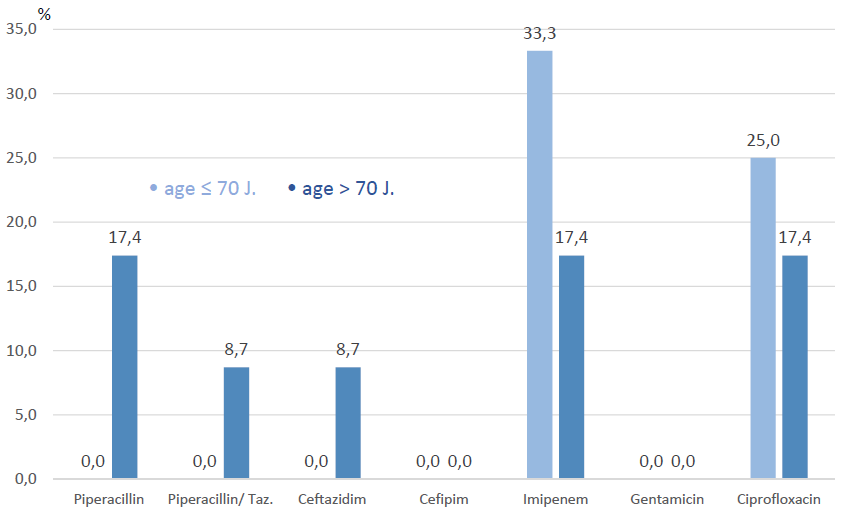 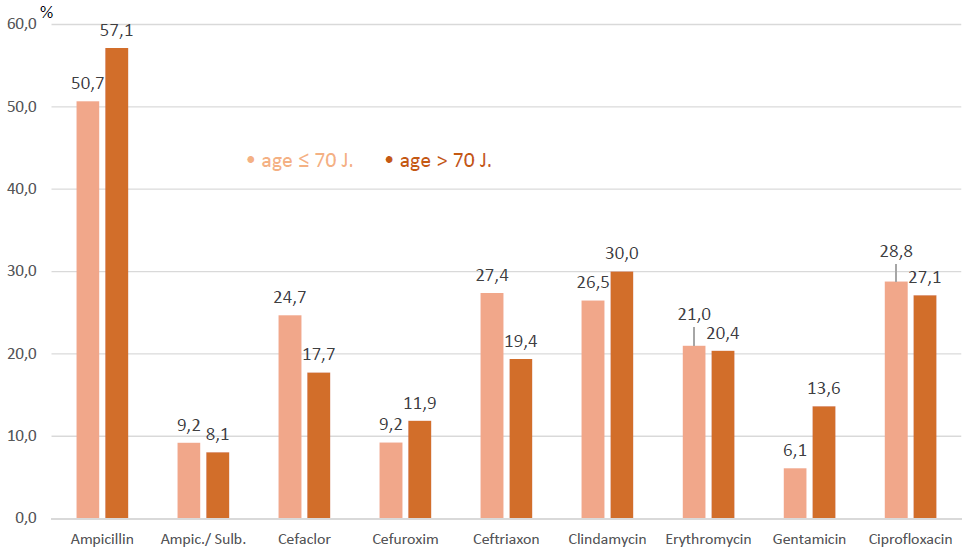 Gram negative species altogether showed high resistance rates against Ampicillin combined with β-LI (93% to 100%) and Cefpodoxim a third generation cephalosporin (38% to 48%). Imipenem and Piperacillin/Tazobactam resistance decreased with increase of age (-14.0% and -5.1% respectively), whilst Meropenem and Cefipim resistance remained low (~5%), (Figure 6). 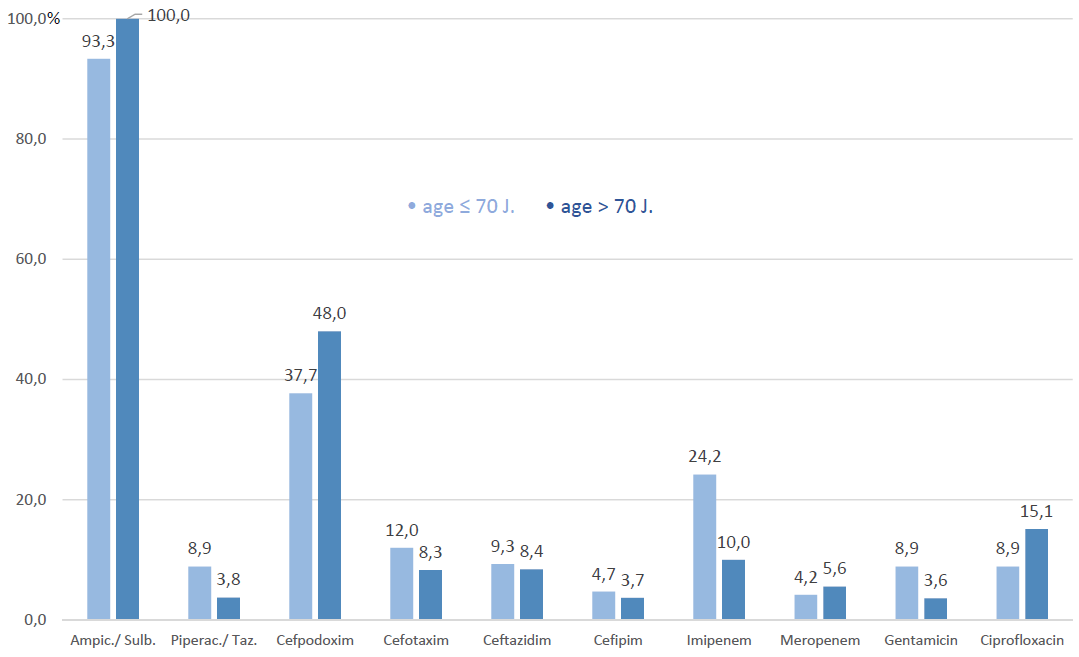 Most infected DFU are caused by gram-positive species according to results of other microbiological studies in patients with DFS [4,5]. But national and regional variation in pathogens and antimicrobial susceptibility exist in the literature [6,7]. For example there were much more Escherichia coli proved in India, while the prevalence of SAU was also about 18% to 20% [7]. From Turkey they surprisingly reported only 36.4% gram-positive organisms. Gram-negative organisms constituted 60.2% of all the isolates, and the most commonly isolated gram-negative was Escherichia coli (15%) [8]. DFS infection is often caused by a mixture of germs. In average the number of germs in a wound was 2.4 in our cohort.

The isolated SAU strains showed a high resistance rate against Benzylpenicillin and Ampicillin due to their property of building penicillinases, but insensitivity against β-LI combined therapy or Oxacillin is low (≤5%) and decreases with increase of age. Comparing our results with results of a hospital with maximum care, resistance rates in SAU are comparable concerning penicillin family: Benzylpenicillin 62%, Oxacillin 7%, Ampicillin/Sulbactam 5% [4].

The resistance against Clindamycin, Erythromycin and Ciprofloxacin amount about 20% and is much higher than in our comparative group: Clindamycin 14%, Erythromycin 15% and Ciprofloxacin 12% [4]. This is certainly caused by several previous oral antibiotic treatments, thus patients with DFS are often repeatedly treated with antibiotics in their medical history. However, a comparison group from India reported much higher resistance rates against Ciprofloxacin (31.3%), Erythromycin (37.5%), Gentamicin (37.5%) and Oxacillin (31.3%), but this group contained only 16 isolated SAU and is therefore very small [6]. The prevalence of MRSA in DFU is estimated to be 20% to 30% in some countries [6,9,10]. The Indian cohort for example reported a MRSA rate of 25% [6]. The prevalence in our cohort is low, about 1.7% of all isolated SAU strains.

Regarding gram-positive germs altogether, the higher resistance rates against Ampicillin with or without β-LI, Cephalosporins of second and third generation and Gentamicin are certainly caused by a relevant proportion of Enterobacteriaceae like EFC and Corynebacteria. Especially Corynebacteria are often presented broad spectrum resistant and may contribute to these results.

The possibility of oral administration may have caused the high resistance rates of Ampicillin/Sulbactam and Cefpodoxim in gram-negative species. Fortunately the resistance against Piperacillin/Tazobactam and Meropenem is low in the older group (<5%).

The majority of infected DFU are caused by gram-positive germs, especially SAU dominates the bacterial spectrum with about 20% - and there is no difference between old and aged patients. With increase of age gram-negative germs, in particular PSA, become more-but not significant-prevalent.

To handle gram-positive diabetic foot infection in elderly penicillin should always be combined with β-LI, because β-LI free treatment options bear a high risk of resistance through all age groups. If chosen Clindamycin, Erythromycin or Ciprofloxacin for reason of Penicillin allergy or comfort of oral administration, one should consider resistance rates of about 20% in SAU and other gram-positive species. International consensus papers recommend Flucloxacillin in antibiotic naïve and Doxycycline or Clindamycin in non-antibiotic naïve patients for mild infected DFU. Considering our results, this might be afflicted with under-treatment because only 20% of isolated strains were SAU and efficacy spectrum of Flucloxacillin is limited.

When gram-negative germs are suspected Piperacillin/Tazobactam or Meropenem are appropriate and effective treatment options, although resistance rates in PSA might be higher with increase of age.

In all cases, treatment of an infected diabetic foot lesion should be focused to a narrow spectrum of pathogen cover, ideally directed by culture results, although empirical treatment is often required. There are obviously only marginal changes in bacterial spectrum and resistance rates between old and aged individuals with DFS.

Copyright: Dörr S. ©2019. This is an open-access article distributed under the terms of the Creative Commons Attribution License, which permits unrestricted use, distribution, and reproduction in any medium, provided the original author and source are credited.

Open Access by Magnus Med Club Ltd is licensed under a Creative Commons Attribution 4.0 International License. Based On a Work at magnusmedclub.com